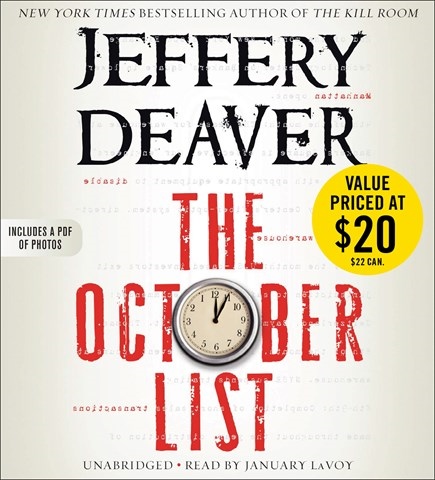 Jeffrey Deaver's latest novel is written in reverse—meaning the beginning is actually the end of the book and vice versa. This structure makes the audiobook a bit harder to follow than the print edition because the listener can't page back as easily. January LaVoy does more than her share with her excellent performance of this confusing mystery. She pulls off men's voices with the same ease as female voices and helps sustain the mystery throughout. She’s convincing as Gabriela, a woman who is distraught because her 6-year-old daughter has been kidnapped and is being held for a half-million dollars and something called the October List, which allegedly warns of a pending Wall Street disaster. LaVoy gives nothing away that would spoil the plot, which makes the many twists in the novel even more surprising. M.S. © AudioFile 2013, Portland, Maine [Published: DECEMBER 2013]