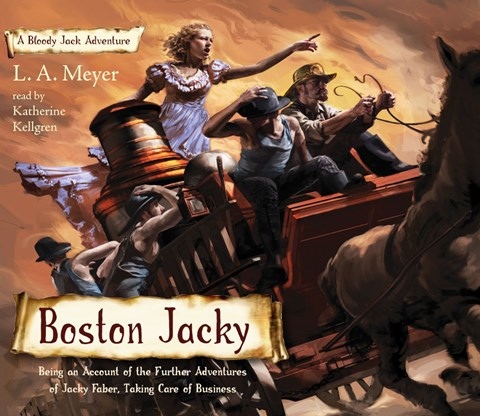 BOSTON JACKY Being an Account of the Further Adventures of Jacky Faber, Taking Care of Business

Katherine Kellgren’s exuberant performance reflects Jacky Faber’s irrepressible personality in this eleventh installment of the Bloody Jack series. Here, Jacky finds herself in Boston among friends. Kellgren moves fluidly between singing, narration, and a cast of distinct voices and accents as Jacky copes with her shipping company’s financial problems and the absence of her beloved Jaimy by purchasing a rundown pub, opening a theater, and setting out to recover buried treasure. Kellgren keeps pace with Jacky’s emotions, which range from rage to joy to sorrow as she navigates the consequences of antagonizing the temperance movement, her friends, and a mob of arsonists. This rollicking production will appeal to both fans of the series and those new to it. A.F. 2015 Audies Finalist © AudioFile 2014, Portland, Maine [Published: NOVEMBER 2014]