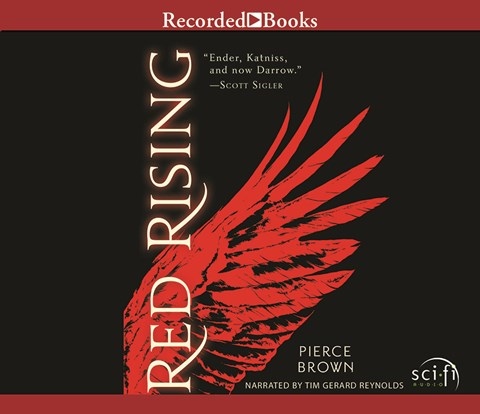 Narrator Tim Gerard Reynolds's portrayal of a virtual slave trapped in the life-sucking mines of Mars is top-notch. The story could have been as easily set in a feudal European camp as on the distant red planet. The rugged dignity of the hero, Darrow, who escapes and challenges the universe's ruling class, is almost Shakespearean. His righteous hatred is visceral. Reynolds portrays him like a brawling Irishman who realizes he’ll never defeat his masters until he becomes one of them. As Darrow changes mentally and physically, Reynolds's portrayal slowly changes as well. In addition, his depiction of the ruling class as golden-skinned perfect people rings true, as does their disdain for the lowly Reds who live short lives mining for the precious metals that sustain their totalitarian society. M.S. Winner of AudioFile Earphones Award © AudioFile 2014, Portland, Maine [Published: APRIL 2014]