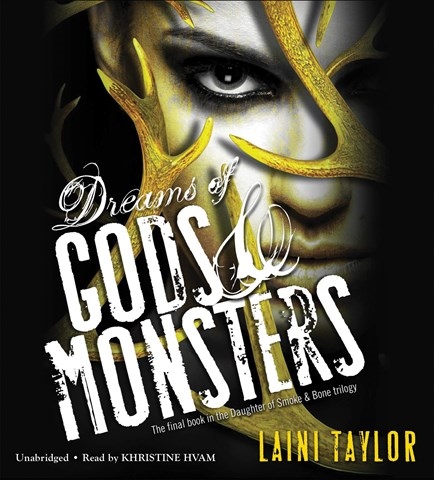 DREAMS OF GODS & MONSTERS Daughter of Smoke and Bone, Book 3

In the epic conclusion to the Daughter of Smoke and Bone trilogy, Karou becomes an epicenter for both Chimera and Misbegotten Seraphim as they struggle to save their home world, Eretz, from the newly crowned Emperor Jael. The war’s emotional toll is hauntingly evident in Taylor’s novel. However, Khristine Hvam’s narration brings levity and hope to listeners as Karou’s friends and former enemies band together to fight the evil that could destroy them all. Hvam’s accents and cadence for these characters, Zuzana especially, give lightness to this rich, dark tale. At the same time, she captures the tension in each scene, keeping listeners riveted until the final sentence. J.M. © AudioFile 2014, Portland, Maine [Published: JUNE 2014]