Home»Reviews»YOUR FATHERS, WHERE ARE THEY? AND THE PROPHETS, DO THEY LIVE FOREVER? 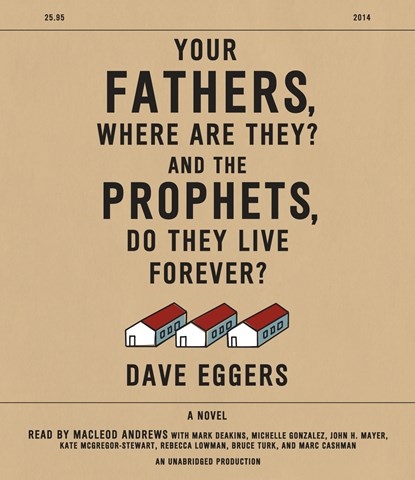 YOUR FATHERS, WHERE ARE THEY? AND THE PROPHETS, DO THEY LIVE FOREVER?

Here’s the setup for this audiobook, narrated by an ensemble cast: A man named Thomas essentially kidnaps an astronaut named Kev and holds him on an abandoned military base. They have a connection that Kev struggles to recognize, but as the book moves along, this becomes clearer and clearer. The book is presented almost like a play, and the result is an engaging, raw blunt instrument that only happens to resemble a work of literature. MacLeod Andrews does the bulk of the narration, complemented by a cadre of terrific voices that inhabit the characters they portray. There’s enough salty language to cover a ton of peanuts, but little of it is gratuitous, given the story’s conceit and the author’s writing, which tends to be on the edgy side. R.I.G. 2015 Audies Finalist © AudioFile 2014, Portland, Maine [Published: JUNE 2014]