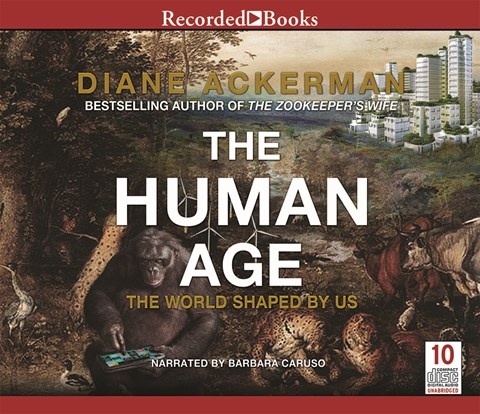 THE HUMAN AGE The World Shaped by Us

With an inquisitive tone, narrator Barbara Caruso dives into Diane Ackerman's exploration of the current geological age, in which “nature surrounds, permeates, effervesces in, and includes us.” This is the human age, the Anthropocene. Caruso's clear, unhurried enunciation prevents listeners from being overwhelmed by the scope of Ackerman's research, which runs the gamut from primates to weather to the blue revolution and beyond. The narrative is conversational, marked by rhetorical questions that Caruso inflects perfectly to spark the intended wonder. Despite the grim realities that led to the Anthropocene, Ackerman—and Caruso—offer a hopeful perspective that challenges listeners to reconsider the role that humans will play not only in nature but also as nature, going forward. A.S. © AudioFile 2014, Portland, Maine [Published: OCTOBER 2014]