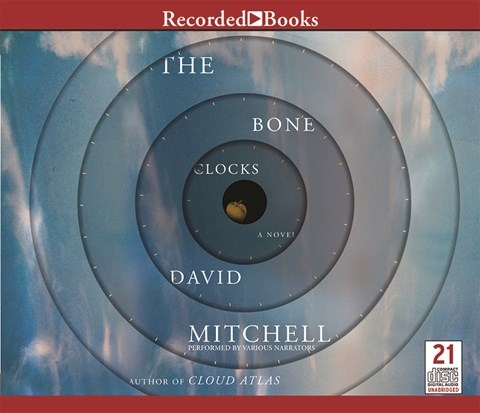 David Mitchell’s sixth novel, nominated for the Booker prize, contains six sections, each connected by the character of Holly Sykes. Mitchell (CLOUD ATLAS) uses nonlinear leaps through time and reality, and listeners benefit from the spot-on performances of six talented narrators. The “Radio People” and “Horologists,” denizens of an alternate world, are having a philosophical/spiritual war. A tear in Holly’s psychic fabric allows her to hear them. All six actors do a remarkable job. Jessica Ball sets the tone as, in 1984, 15-year-old Holly learns harsh life lessons. Leon Williams, Colin Mace, Steven Crossley, Laurel Lefkow, and Anna Bentinck round out the impeccable cast, until the final section, in which 60-year-old Holly, now a successful author, observes from a remote corner of Ireland as the world’s infrastructure crumbles. Fascinating listening. S.J.H. Winner of AudioFile Earphones Award, 2015 Audies Finalist © AudioFile 2014, Portland, Maine [Published: OCTOBER 2014]