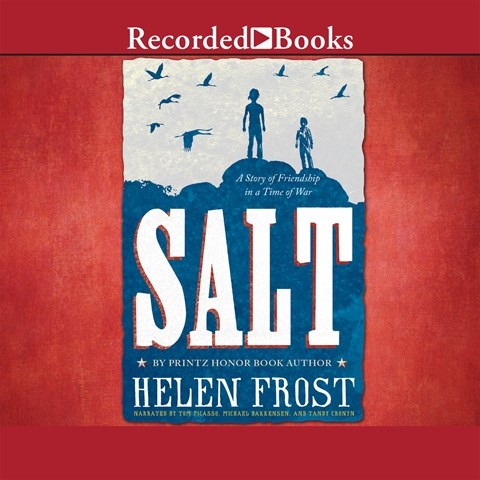 SALT A Story of Friendship in a Time of War

A cast of three offers a stirring performance of this moving fictional story, set at the turning point of the War of 1812. Tom Picasso is the voice of James, the son of an American trader. Picasso’s dynamic narration highlights James’s roots with quick speech and a light pace. Michael Bakkensen is the voice of Anikwa. His narration takes on a slower and more rhythmic pace than Picasso’s, echoing the poetic observations and speech patterns of Anikwa’s Native American language. While Tandy Cronyn’s precise narration of the boys’ poems reflects the growing tension between the traders and the Natives, her velvety voice also highlights the themes of friendship in this powerful story for teens. M.F. Winner of AudioFile Earphones Award © AudioFile 2014, Portland, Maine [Published: DECEMBER 2014]