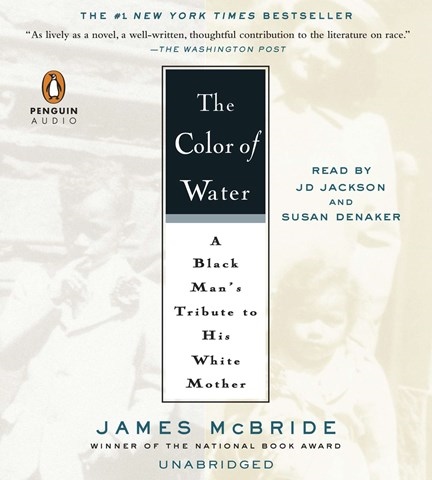 THE COLOR OF WATER

McBride's book tells two stories: One recalls his upbringing in a black family in the 1960s and '70s, and the other recounts his mother's growing up an Orthodox Jew and leaving that life to marry a black man in 1942. JD Jackson and Susan Denaker deliver the son's and the mother's parts in successive sections. They're expressive, have good voices, and are adept at pacing and at giving the text its proper emotional tone. Denaker has more opportunity to show her creativity by providing character voices, which are done well, if slightly overdone. Jackson, when relaying the conversations of the mother with her son, gets to give voice to her character, and he does so in a way that fits Denaker's performance. The two halves of this skillful reading add up to an affecting whole. W.M. © AudioFile 2014, Portland, Maine [Published: NOVEMBER 2014]