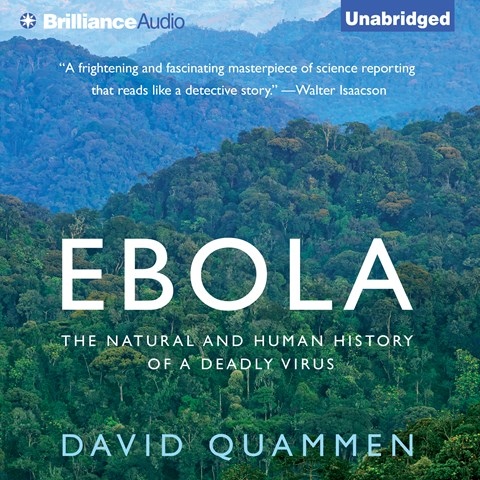 EBOLA The Natural and Human History of a Deadly Virus

In this brief audiobook, prominent nature writer Quammen excerpts and adapts material from his 2012 book, SPILLOVER. That book examined the increased prominence of "zoonotic diseases"--diseases that spread from animals to people. Here Quammen focuses on the origins of Ebola in Africa. He covers the 2014 Ebola outbreak in West Africa in an epilogue. He is an engaging writer, offering solid scientific explanations and riveting human stories. Mel Foster's upbeat delivery goes well with stories from the frontiers of science but can seem insensitive when describing the heartrending tragedies in Ebola's wake. Overall, he is easy to understand and does a good job of pronouncing both African place names and medical terms. F.C. © AudioFile 2015, Portland, Maine [Published: APRIL 2015]