Tease: Intro to the Genre

Oh, dear. You know how you have an idea, and you think it’s a good idea, and then after a while, you realize you didn’t know what you were getting into? This is that time. 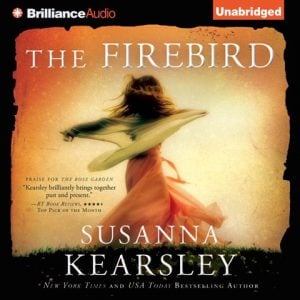 It was supposed to be simple (sigh). Introduce audiobook listeners to the romance genre with a few touchstone titles. These are audiobooks that epitomize the best of the genre and would appeal to a wide range of listeners. I thought I would organize it by category — for example, if you’re a mystery reader, you can jump into a romantic suspense listen and barely notice the landing. I had a few titles and narrators in my head. I started to organize them on paper to make categories. I jotted titles on the first paper. Quick and easy, right? Not so. I ran out of paper, had to start a second sheet. I thought of more suggestions. Then, I had to turn both of the sheets sideways in order to scribble more titles. Then, I was squeezing them in between the lines on both notes. Did I mention I don’t have good handwriting to begin with?

Long story short, there are MANY gateways to romance audio, and they are all worth entering. Here are a FEW to get you started. (Yes, this is a much shortened list from the original notes.)

IF YOU LOVED OUTLANDER 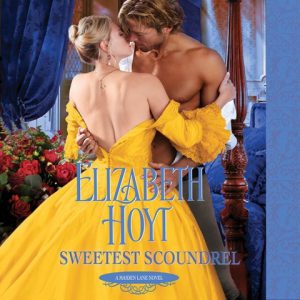 Susanna Kearsley’s romances often bounce back and forth in time, and are delightfully detailed. I’m recommending THE FIREBIRD because the narrator is Katherine Kellgren, who excels at bending her voice in multiple directions with great vigor. Enjoy your round-trip journey to Catherine the Great’s Russia.

Elizabeth Hoyt writes British historical romances with unconventional match-ups.  THE SWEETEST SCOUNDREL stars the illegitimate daughter of a duke and a middle-class theater owner. Narrator Ashford McNab gives listeners an earthy hero with no manners, his retiring business partner, and every character in between. A great performance with a theatrical flair. 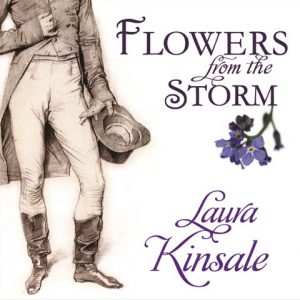 Imagine the perfectly elegant Duke of Jervaulx, unable to communicate, presumed mad. The woman who understands him must be someone special. Narrator Nicholas Boulton has a voice like a spoon stirring honey reading FLOWERS FROM THE STORM, rich and thick with no rough edges. Pick any of his Laura Kinsale titles — you won’t go wrong.

IF YOU LISTEN to WOMEN’S FICTION

The jump from “Women’s Fiction” to “Romance” is really more like a sidle. From my perspective, you’re going to get a more structured storyline and a more definitive happy ending. Other than that, there is wide variety and much to enjoy.

WHAT LOVE TASTES LIKE, Zuri Day’s playful romance with tons of cooking banter, hits every note. Narrator Patricia R. Floyd sings the wonder of finding the perfect guy and working through your issues with a joyful reading. 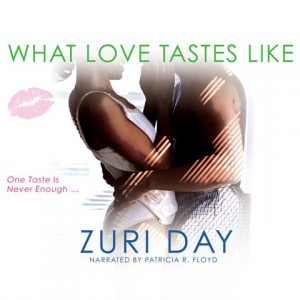 Jill Shalvis is known for contemporary stories in cozy settings and interesting details about a variety of careers. In SWEET LITTLE LIES, boat captain Pru and bar owner Finn come to life through narrator Karen White.

THE GIRL ON LEGARE STREET is a southern mystery/paean to architectural history/woman has issues with her family novel with a nice splash of romance thrown in. Narrator Aimée Bruneau builds the atmosphere of Melanie Middleton’s Charleston even as she makes Melanie’s and her personal crises incredibly likable.

IF YOU’RE A MYSTERY/SUSPENSE LISTENER

UP CLOSE AND DANGEROUS is So. Much. Fun. Plane crashes into snowy mountain. Grumpy pilot and spoiled socialite learn to appreciate each other while in survival mode. Yummy. Narrator Natalie Ross is smooth and funny. 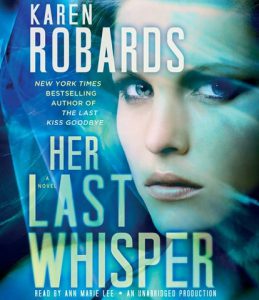 A woman who communes with the dead and a sexy ghost who won’t leave her side? Yes, please! Narrator Ann Marie Lee produces a credible southern drawl for Michael, a nice contrast to the feminine Charlie in HER LAST WHISPER.

IF YOU’RE A FANTASY LISTENER

All of these have strong world building, kick a** characters, and at least some romantic elements. The perfect mix!

Tamora Pierce’s WILD MAGIC is my only full cast audiobook here. It’s a young adult title, but the chemistry between the young mage Daine and her older love interest is obvious as the series goes along. An addictive fantasy with a lot of heart. 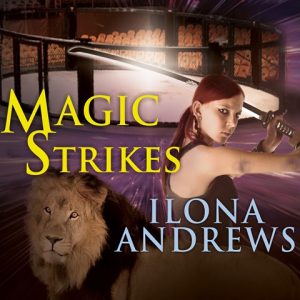 In a perfect world, I would own every single Andrews/Raudman combo. (Just sayin’!) MAGIC STRIKES is set in a magical version of Atlanta, where paranormal creatures separate power among their factions. Kate Daniels works for magical law and order but has secrets of her own. Narrator Renée Raudman is fun, passionate, builds the drama, and sells the story.

CINDER is Cinderella—except in this fairytale rewrite, she’s part Cyborg. It totally works, and Rebecca Soler is on fire as the narrator. I was literally bouncing up and down in my seat during parts of this series. Soler conveys so much conviction and devilish humor in her reading.

In my mind, this is the Janet Evanovich listener. You like goofy, funny, situation- or dialogue-driven humor, and you’re a little less genre specific as long as you can join in the fun. 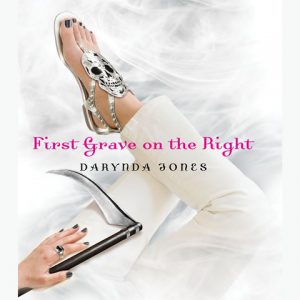 Imagine if the Grim Reaper were a female private investigator in Albuquerque. Narrator Lorelei King can, and thus, so can her listeners! Mayhem and snark take center stage. The whole series is great but start with FIRST GRAVE ON THE RIGHT.

I’m just going to let the AudioFile review of BRIDGET JONES: THE EDGE OF REASON speak for itself: “There may be some more entertaining reading experience than Barbara Rosenblat’s performances of Bridget Jones, but I can’t think what they might be.“ British sass, echoes of Colin Firth — it’s all here.

BET ME is a legendary romantic comedy — am I remembering the attack cat correctly? — with a narrator who is just as engaged as the listener. Nothing better.

THE SPYMASTER’S LADY is a double threat — this story of two spies dueling it out in the French countryside in the Napoleonic era is exquisite, and narrator Kirsten Potter lives the story. Always in the moment, she shows Annique and Robert as equal partners with a light grace. 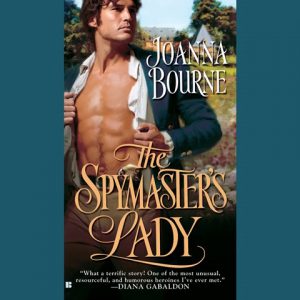 In a futuristic world, those with psychic gifts are without emotion, quiet and dull, until silence breaks. Author Nalini Singh navigates through the changing political climate with dense, carefully crafted novels, each with a romance at its core. You can jump in anywhere with a little imagination — I did, and then went back to the beginning! Give SHIELD OF WINTER a try.

SERAPHINA is an unusual teen fantasy where a girl with musical gifts lives in a world with humans and dragons who rarely see eye to eye. Lots of political drama and deep characterizations.

Robyn Carr specializes in small town sagas, and the Thunder Point series is a little shorter than her epic Virgin River (also recommended). Therese Plummer narrates with amazing heart — yes, I’ve cried while listening to her. Dive in with THE WANDERER. 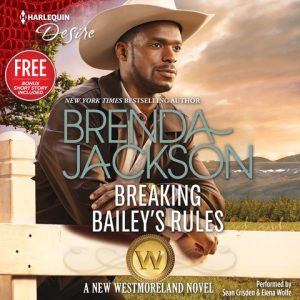 Who doesn’t love a western? Diana Palmer’s Long, Tall Texans series about small town Texas is easy to jump into with lovable characters, sensual romance, and that inspiring Texas kindness that will make you want to visit. DEFENDER is a great way to start!

Dark crime, deep dives into issues, and intense relationships. The opposite of beach reads, these are for hard-core listeners who hold nothing back.

Give J.D. Robb’s hugely popular futuristic crime series starring detective Eve Dallas a try. NAKED IN DEATH is the first in the series, although there are over 40 titles now, so get listening! Narrator Susan Ericksen mixes humor with police procedure.

Cynthia Eden’s darkly detailed series follows an FBI profiling team tracking down serial killers. Narrator Summer Morton’s tone sets the stage for Eden’s mysteries with a splash of romance. Start off with AFTER THE DARK. 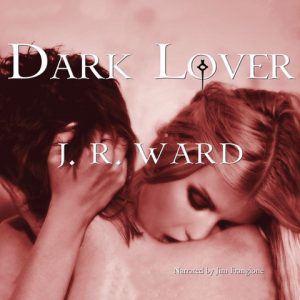 There is not a curse word that J.R. Ward has not used in her Black Dagger Brotherhood series. Luckily, narrator Jim Frangione is up to the task of characterizing Ward’s vampires living in upstate New York as they find true love and attack all evil that moves. It all starts with DARK LOVER.

Where will you start for your introduction to romance? What audiobook brought you to the genre? Let us know in the comments!

Tease: Hot Listens That Pick Up The Pace
Caitlin Augusta | 09.12.17
If you feel that the world seems to be spinning faster than ever these days, you're not alone. AudioFile romance reviewers have selected a few fast-paced titles—newly released—that

Tease: Romance is Negotiation
Caitlin Augusta | 08.15.17
Author Kathleen Woodiwiss (1939-2007) owns the signature honor of creating the historical romance in its 20th-century form. Her alpha heroes dominated every situation and often

Tease: 7 Romance Audiobooks Good for a Laugh
Caitlin Augusta | 08.01.17
Mixing romance and humor can be a tricky balance — and finding a narrator to dish out zany dialogue or ironic quips with droll aplomb is not as easy as it sounds. Often when I'm