Audiobooks: MACHINE; BUNNY; THE ECHO KILLING; A CROOKED TREE; THE BOY AT THE DOOR; WHISKEY WHEN WE'RE DRY


Sophie Amoss, a New Orleans native, is a New York-based Earphones award-winning and Audie nominated audiobook narrator, as well as a SOVAS nominated commercial and video game voice actor. Sophie has narrated audiobooks for James Patterson, Chuck Palahniuk, Peter Swanson, and Alafair Burke to name a few. She works as a narrator for Penguin Random House, Simon & Schuster, HarperCollins, Macmillan, Hachette, Recorded Books, Brilliance Audio, Blackstone Audio, and John Marshall Media. She has brought her voice to such brands as AirWick, ExxonMobil, Olay, and Microsoft. You can find her as the character Squeamlish in Blizzard Entertainment's "Hearthstone", as well as Ma'ra Grimfang in"World of Warcraft". She is a graduate of Sarah Lawrence College and Columbia University, where she earned an MFA in Acting. 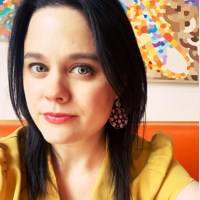