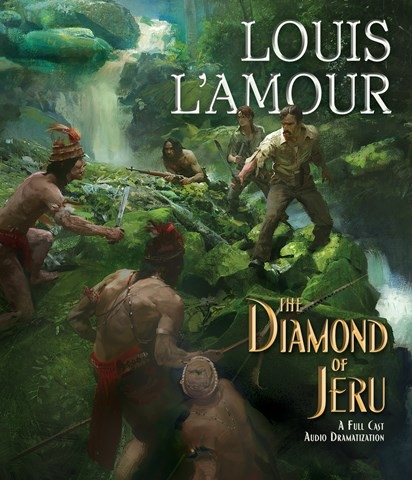 THE DIAMOND OF JERU

by Louis L'Amour | Read by a Full Cast

A hard-luck Korean War veteran gets a second chance when he’s hired to lead a timid scientist and his beautiful wife on a search for a rare jewel on one of the most fearsome islands in the world. What could go wrong? Beau L’Amour has pulled out all the stops in adapting an unfinished 1950s short story by his father into a sweeping film-like audio production. The music is evocative of classic 1940s film scores, and the lush and detailed sounds of rushing streams and ever-present jungle critters practically surround the listener. Seasoned professionals abound in the cast, making this a fine adventure. B.P. Winner of AudioFile Earphones Award © AudioFile 2015, Portland, Maine [Published: JULY 2015]