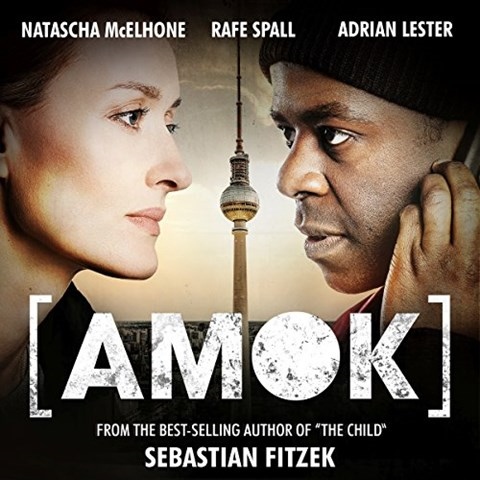 A criminal psychologist is hoping for a slow day on her last day before leaving the Berlin police force. But in a last-ditch effort to discover the whereabouts of his missing fiancée, a brilliant but troubled psychiatrist takes hostages at a local radio station. Dramatic sparks fly as soon as British theater and film standouts Natascha McElhone (THE TRUMAN SHOW, SOLARIS) and Adrian Lester (OTHELLO, HUSTLE) begin the tense negotiations. For the most part, as the plot twists and turns, the rest of the talented cast and the realistic noir dialogue keep this thriller moving at a crisp pace. However, the production slows in some spots where the material itself is redundant or overly descriptive. The story doesn't need all those extra words--the outstanding, emotive performances tell the story just fine all by themselves. B.P. 2016 Audies Finalist © AudioFile 2016, Portland, Maine [Published: JANUARY 2016]