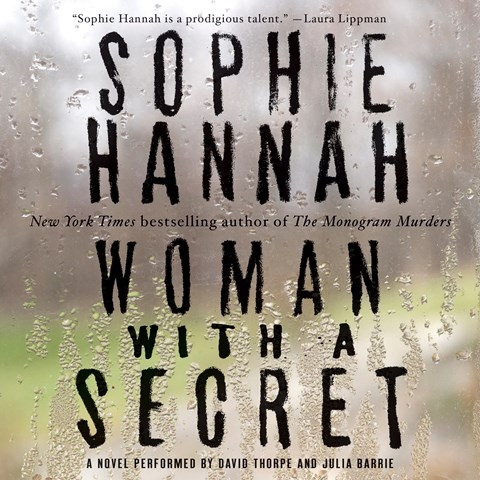 WOMAN WITH A SECRET

Everyone has a secret, but Nicki Clements has many--perhaps even one involving a murder. Narrator Julia Barrie performs the sections of this mystery that are told from Nicki's viewpoint, beautifully portraying the protagonist's growing paranoia as her dual lives--suburban mother and online risk taker--collide, threatening to destroy her life. David Thorpe takes over the narration when the audiobook switches to DC Simon Waterhouse's perspective. Thorpe smoothly alters the register of his voice to believably characterize both men and women as the detective and his team sort out the details surrounding the murder of a local celebrity. Together, Barrie and Thorpe build the tension and maintain consistent personalities for the many suspects. Although part of a series, this audiobook also works well as a stand-alone. C.B.L. © AudioFile 2015, Portland, Maine [Published: OCTOBER 2015]