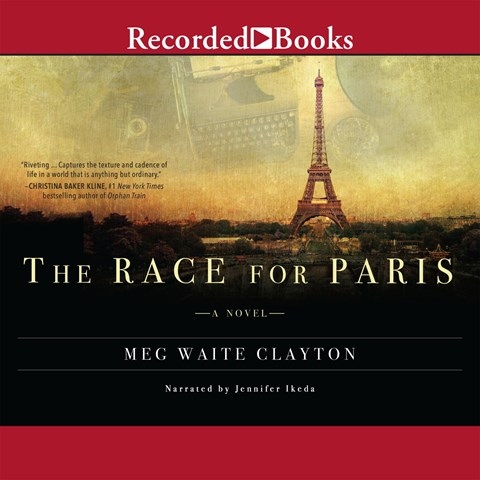 THE RACE FOR PARIS

Inspired by the real-life female journalists and photographers who defied convention during World War II, the story follows two Americans, Jane and Liv, and their British male counterpart, Fletcher, as they race across France during the summer of 1944 to be the first to cover the Allied invasion of Paris. Told in short chapters, the story moves quickly; however, narrator Jennifer Ikeda doesn't rush. Her careful inflections conveys a range of emotions, from resolute determination to trembling fear, that ensure the characters' experiences aren't overshadowed by the painstaking historical detail, including harrowing descriptions of war. While her French pronunciation is flawless, Ikeda's other accents, particularly for male voices, veer toward caricature. Fortunately, this is only slight distraction in an overall satisfying listen of unsung history. A.S. © AudioFile 2015, Portland, Maine [Published: OCTOBER 2015]