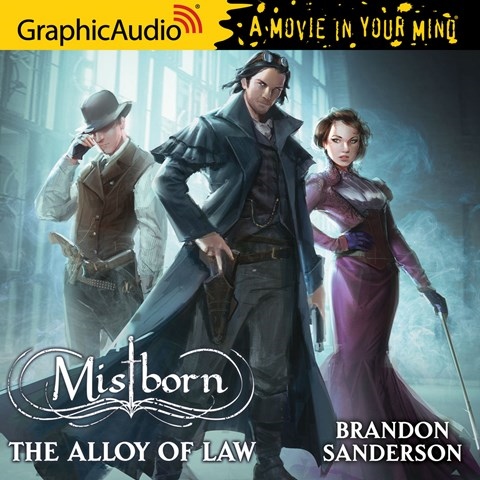 MISTBORN 4 The Alloy of Law

by Brandon Sanderson | Read by Terence Aselford and a Full Cast

This Victorian fantasy hits the ground running and never looks back. Narrator Terence Aselford's rich baritone works with the accompanying sound effects, skillfully tying together the intricacies of a magical world. Chris Genebach shines as main character Wax Ladrian, a man with the power to manipulate metal and even his own body weight, allowing him to fly through the night. After personal tragedy strikes, Wax returns to his hometown of Elendel, leaving his outlaw lifestyle behind to assume his duties as a nobleman. The stoic growl rippling under Wax's polished upper-class tones betrays his renegade past. From the crunch of boots to a riveting musical score, every detail has been accounted for in this engaging audio drama. E.E. © AudioFile 2017, Portland, Maine [Published: FEBRUARY 2017]