Home»Reviews»HOW TO FIGHT A DRAGON'S FURY 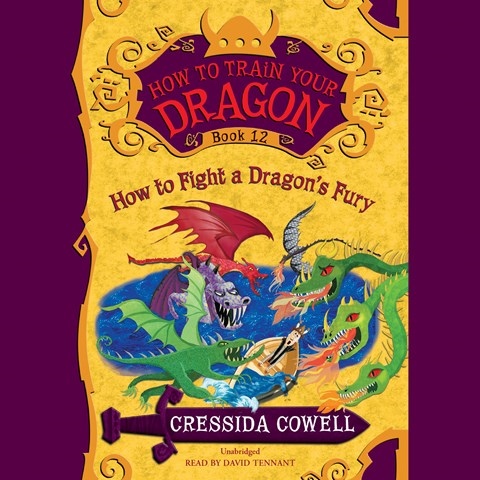 HOW TO FIGHT A DRAGON'S FURY How to Train Your Dragon, Book 12

The final chapter of Hiccup's dragon adventures is spectacular from start to finish. Narrator David Tennant pulls out all the stops. Listeners will gasp in horror as battle-worn Hiccup, marooned on the Isle of Tomorrow, pursued by sand sharks and a vampire spy dragon, struggles to regain his lost memory with only an ancient sea dragon and an overeager, obtuse hogfly dragon for help. Tennant adds a few new voices to his repertoire, particularly that of the Druid Guardian, whose stentorian bellows silence even Alvin the Treacherous's whining. Tennant uses an endless supply of unique Viking voices for the tribe members who sing badly out of tune and shout praise to Hiccup as he faces the dragon rebellion leader, Furious, in a final epic battle. M.F.T. 2017 Audies Finalist © AudioFile 2017, Portland, Maine [Published: MARCH 2017]