Home»Reviews»HOW TO CHEAT A DRAGON'S CURSE 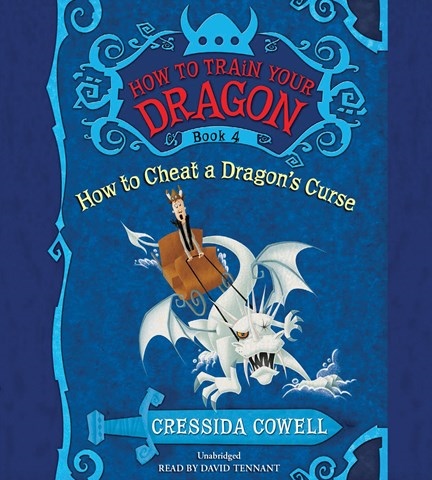 HOW TO CHEAT A DRAGON'S CURSE How to Train Your Dragon, Book 4

[Editors' Note: The following is a combined review of HOW TO CHEAT A DRAGON'S CURSE and HOW TO SPEAK DRAGONESE.]--Even without the humorous artwork of the print editions, narrator David Tennant keeps the spirit of fun alive with over-the-top portrayals of the many goofy warriors in the continuing memoirs of young Hiccup Horrendous Haddock III. It's curious to hear Tennant's Scots brogue delivering the speech of Norse Vikings, and his Roman soldiers sound more like stereotypical Italian immigrants than ancient legionnaires. However, these inconsistencies will likely be missed by young fans of adventure and humor. Dragon translations, statistics, and other "factual" digressions are delineated with introductory music and a professorial tone. Transitional music separates the short chapters but is often too loud, dictating frequent volume changes. Tennant is probably best known as Doctor Who and Harry Potter's Barty Crouch, Jr. L.T. © AudioFile 2013, Portland, Maine [Published: DECEMBER 2013]