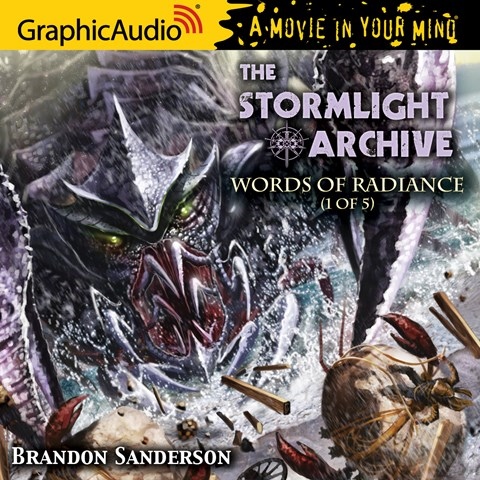 THE STORMLIGHT ARCHIVE 2 Words of Radiance (1 of 5)

by Brandon Sanderson | Read by Dylan Lynch and a Full Cast

Narrator Dylan Lynch carries the next installment of this series with a deliberate, measured pace, savoring the words. Kaladin Stormblessed is now in command of the royal bodyguards of his kingdom and has fully bonded with the magic of Syl, an ethereal being called an honorspren, who acts as a companion and guide. Robbie Gay gives Kaladin an appropriately gruff tone befitting the warrior status of the character. Zoe Badovinac gives scholar Jasnah a breathy, refined British accent befitting her elegant nature. She is tutoring Shallan, a young woman who shows promise at being able to summon and comprehend spren, whose existence is still something of a mystery. The well-balanced music and sound effects are most impressive throughout, immersing the listener in this fully realized fantasy realm. E.E. © AudioFile 2017, Portland, Maine [Published: MARCH 2017]