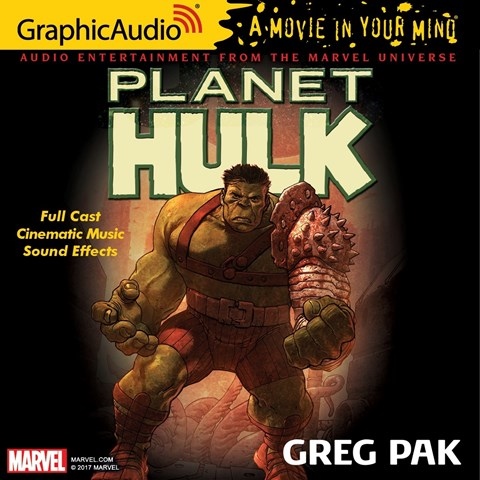 by Greg Pak | Read by Rick Rohan and a Full Cast

Banished from Earth, the usually invulnerable Hulk slips through a portal and lands in a world where not only can he be hurt but he is also sentenced to participate in life-or-death arena battles. The full-cast production features Bradley Smith, who provides a gravelly and brooding voice for Hulk, and Rick Rohan, who functions as the ever-animated and dramatic narrator. Many other solid actors take on the beastly friends and malevolent enemies that Hulk makes as he fights in the arena and eventually attempts to overthrow the planet's leadership. Each fight is amplified with sound effects that add drama without being distracting. L.E. © AudioFile 2018, Portland, Maine [Published: JANUARY 2018]