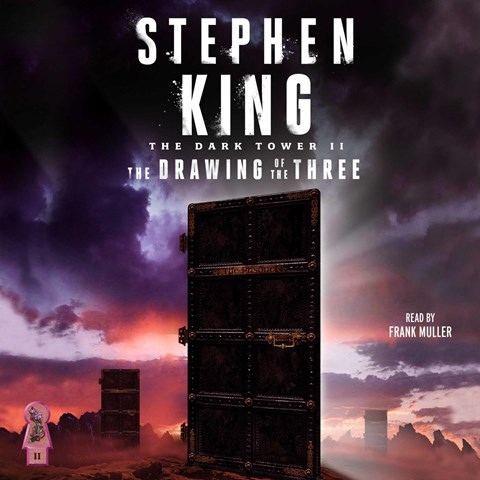 THE DARK TOWER II The Drawing of the Three

In a re-issued collection of the first three books of King's fantasy saga, Frank Muller revisits the world of Roland of Gilead, Jake Chambers, and Eddie and Susanna Dean. King himself originally recorded the three books as he wrote them over a period of ten years. Muller recorded book four, Wizard and Glass, in 1997. The series centers around Roland of Gilead, the last gunslinger to walk the earth since the world "moved on." Roland travels in search of the dark tower, a mysterious, never-seen entity he believes holds the key to the world's having moved on. In a series that provides 36 hours of listening to the same voice (with no special effects), one expects a lapse in interest. But Muller, the master of narration, pulls out all the stops here. He makes characters unmistakable through dialogue and timing. In fast-paced conversation, dreams or breakneck bursts of action, he moves effortlessly among dozens of people. Narrative passages flow with equal grace and fluidity. Muller uses tricks, such as dragging out words and phrases, singing when the characters sing, and contriving animal and mechanical voices. Even his Foreword and Afterword sound like Stephen King . . . with one exception: The author would never pronounce his home city "Bang-er," rather than the "Bang-gore" of a native Mainer. R.P.L. ©AudioFile, Portland, Maine [Published: APR/MAY 99]