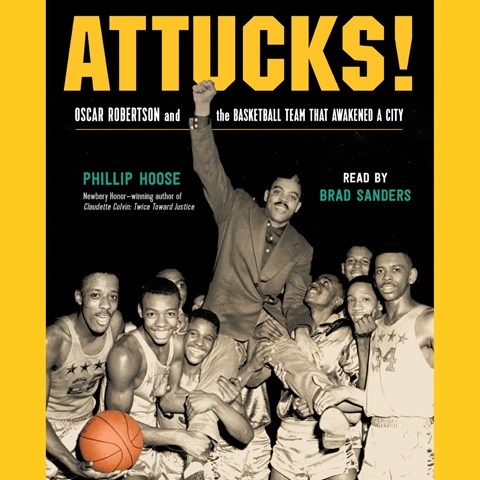 ATTUCKS! Oscar Robertson and the Basketball Team That Awakened a City

Narrator Brad Sanders's baritone voice bestows deserved gravitas on this remarkable true story of a 1950s all-black high school's victory in the Indiana state basketball championship. Sanders's steady reading allows for the wider context of American racial injustice to take center court. His delivery reflects the real-life personalities on the Attucks Tigers team, such as Coach Ray Crowe's measured style and soon to be NBA legend Oscar Robertson's relentless drive and, later, his justified bitterness. The attitudes of Hoosier basketball fans on both sides of history are given accurate depictions. Sanders's even-paced and straightforward account supports rather than overpowers Hoose's well-balanced writing. Hoops and history fans won't be the only ones appreciating this inspirational listen. E.A.N. © AudioFile 2018, Portland, Maine [Published: NOVEMBER 2018]