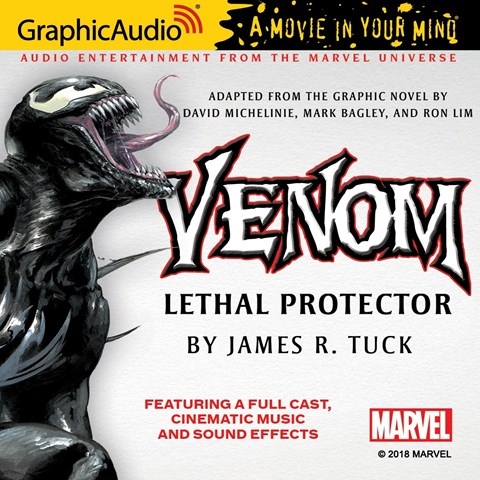 by James R. Tuck | Read by Richard Rohan and a Full Cast

Symbiote superhero Venom's voyage to San Francisco comes to life with a full cast and a variety of sound effects that immerse the listener in the story. The sound effects in many ways enhance the listening experience but at the same time can be a bit repetitive. The real power of this adaptation is the cast. Having such a variety in the narration layers on the detail, ensuring that each character stands out on their own. Particularly notable is Scott McCormick, who voices Venom and his human counterpart, Eddie Brock. His performance is nuanced enough to make them sound like two distinct characters but similar enough that listeners will recognize them as two halves of the same whole. C.J.S. © AudioFile 2019, Portland, Maine [Published: FEBRUARY 2019]