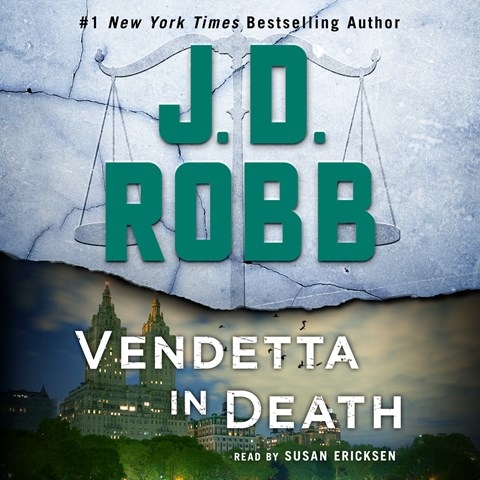 VENDETTA IN DEATH In Death, Book 49

Narrating the 49th book in this series, Susan Ericksen is abundantly familiar with its heroine and wide cast of characters. In the mid-21st century, a self-proclaimed Lady Justice seeks to right wrongs committed against women by murdering the perpetrators in the most brutal ways. Lieutenant Eve Dallas from the New York Police and Security Department (NYPSD) must discover who is behind the murders and stop her before she kills again. Ericksen brings the protagonists alive, creating believable personalities. She gives Eve a tough, no-nonsense tone and Eve's Irish husband, Roarke, a lilting accent. Ericksen switches between the characters with ease and helps build the tension as the story drives toward its dramatic climax. K.J.P. © AudioFile 2019, Portland, Maine [Published: OCTOBER 2019]