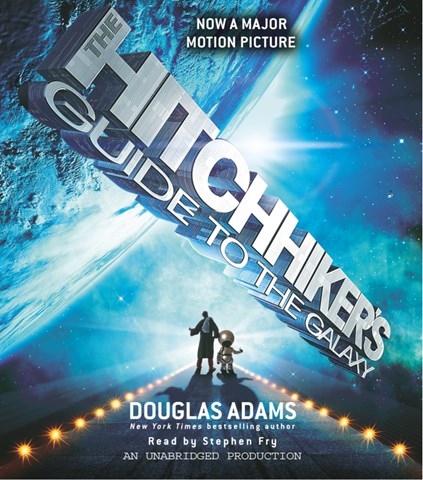 THE HITCHHIKER'S GUIDE TO THE GALAXY

Moments before Earth is destroyed, Ford Prefect, an alien who’s been incognito for 15 years while researching a newer edition of THE HITCHHIKER’S GUIDE TO THE GALAXY, rescues his friend, Arthur Dent. The two stow away on a passing spaceship, and their adventures begin. Ford and Arthur encounter ex-hippie Galaxy President Zaphod Beeblebrox; Marvin, the morose robot; and a slew of otherworldly weirdos populating Douglas Adams’s cult classic. Stephen Fry’s performance is priceless as the interstellar travelers tumble from one near disaster to another. His voice shifts are inspired bits, half schtick, half nonsense. Without editorial comment, Fry injects just the right touches of irony into Adams’s cheeky, always hilarious social satire. This is sure to please fans of Spider Robinson’s THE CALLAHAN CHRONICLES and Terry Pratchett’s DISCWORLD series. S.J.H. Winner of AudioFile Earphones Award © AudioFile 2005, Portland, Maine [Published: AUG/SEP 05]