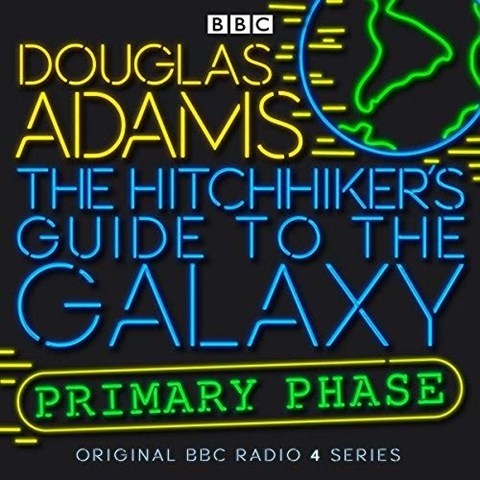 THE HITCHHIKER'S GUIDE TO THE GALAXY Primary Phase

The Earth is scheduled for demolition on a quiet Thursday afternoon, and Everyman Arthur Dent and his galactic guide, Ford Prefect, are lucky enough to catch a timely ride on a Vogon construction ship. So begins this quirky, intelligent sci-fi series, which first took the world by storm as a phenomenally successful BBC Radio series in 1978. The original full-cast performances and playful script sound positively gleeful and as irreverent as ever with a fresh digital remastering by ace British producer Dirk Maggs, who subtly mixed in new sound effects that were too costly or not available in the 1970s. For the longtime fan this recording will be like listening to an old friend. And for the neophyte looking to sample Douglas Adams's gentle comic genius, this is the perfect place to start. B.P. © AudioFile 2009, Portland, Maine [Published: MARCH 2009]