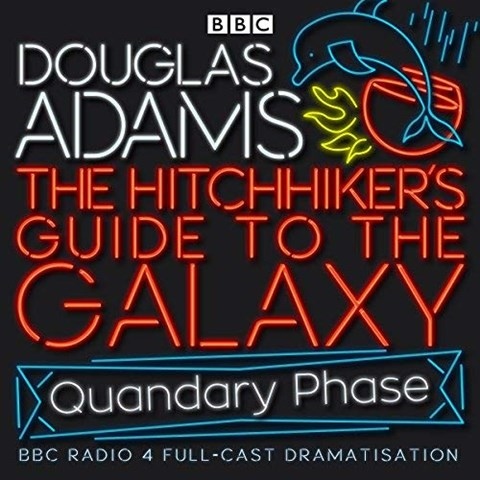 THE HITCHHIKER'S GUIDE TO THE GALAXY Quandary Phase

Based on SO LONG AND THANKS FOR ALL THE FISH, this BBC production follows Arthur Dent, the last survivor of Earth, who has discovered that humanity has merely been relocated to an alternate Earth. After getting the hang of traveling the universe, Dent returns to Earth to resume his life, but, of course, the universe is never that simple. This episodic radio comedy certainly delivers the continuity of the original series from the 1970s. Simon Jones masterfully reprises his role as Dent as if 25 years hadn't passed. With other voices from the original and slightly updated sound effects, this audiobook delivers all the guilty pleasures that made this series popular so long ago. L.E. 2006 Audie Award Finalist ©AudioFile, Portland, Maine [Published: DEC 05/ JAN 06]