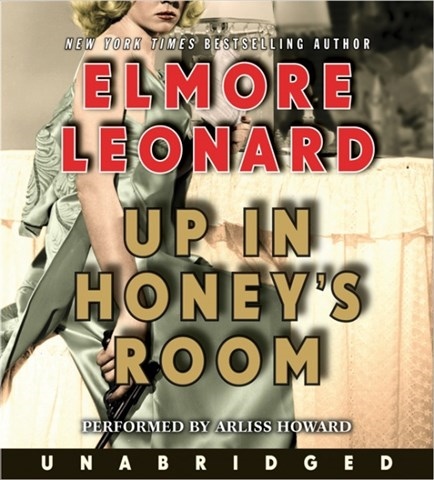 UP IN HONEY'S ROOM

Arliss Howard demonstrated his mastery of rural American voices in Elmore Leonard’s THE HOT KID, in which he first breathed life into the character of Deputy U.S. Marshal Carl Webster. Now, in UP IN HONEY’S ROOM—a sequel of sorts—Howard expands on that performance as he voices Nazi POWs, a Ukrainian femme fatale, a cross-dressing hit man, and one of the most carnal Elmore Leonard characters, the lovely Honey Deal. Though the plot sounds like pulp fiction—a lawman tracks POWs and spy rings in 1945 Detroit—the novel is much more. It’s a strange, often absurd history lesson that ultimately hinges on whether Carl will honor his marriage vows to his machine-gun-toting spouse . . . or succumb to Honey’s charms. R.W.S. Winner of AudioFile Earphones Award © AudioFile 2007, Portland, Maine [Published: AUG/ SEP 07]