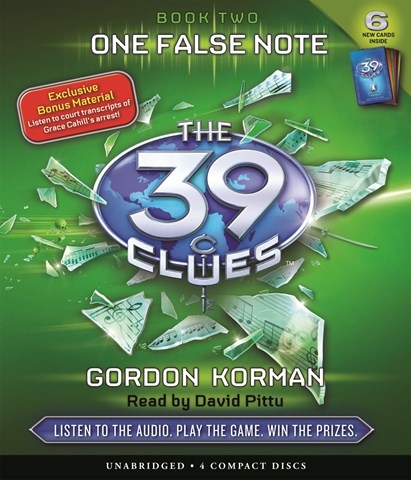 Another well-known children’s author pens the second adventure in this multimedia series, which includes online clues and games, in addition to the audiobooks themselves. As orphaned siblings Amy and Dan Cahill seek clues to promised mysterious powers, the fast-paced plot deepens their understanding of their quest. David Pittu, who will narrate the entire series, injects tension as the siblings race from Vienna to Venice, desperately decoding the journal of Nanneril Mozart, the famous composer's sister. Their quest becomes clearer as the orphans grow to understand their relationships to their own family members, as well as to artists and scientists of the past. Pittu differentiates the Cahills’ adversaries with a multitude of accents and attitudes and creates extra tension by giving each a strong sense of menace and deceptiveness. S.W. © AudioFile 2009, Portland, Maine [Published: JANUARY 2009]