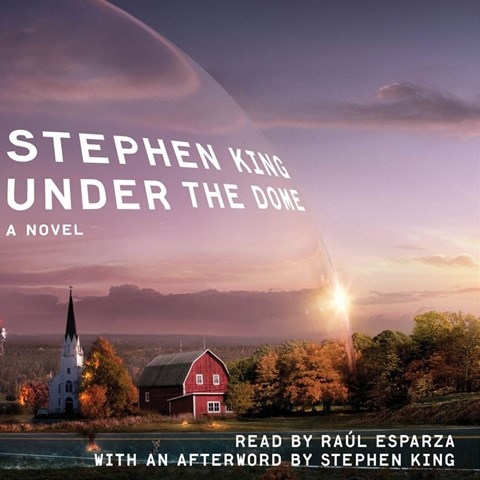 In Kingâ€™s new novel, THE STAND meets â€śThe X-Filesâ€ť when a solid but invisible dome descends over a small Maine town. Those inside are trapped in a new civilization of their own making. Raul Esparza attempts to do justice to Kingâ€™s epic, but hearing King read his authorâ€™s note at the end of the book demonstrates how miserably Esparza falls short of an authentic Maine accent. Narrative passages, delivered without an accent and with impeccable timing, keep the long story moving. However, the dialogue of the primary antagonist, described as a lifelong Mainer, does not sound realistic. Esparzaâ€™s children and women also fare poorly as they are voiced inconsistently and bear little resemblance to the authorâ€™s details on their origins and character. R.L.L. Â© AudioFile 2009, Portland, Maine [Published: DECEMBER 2009]