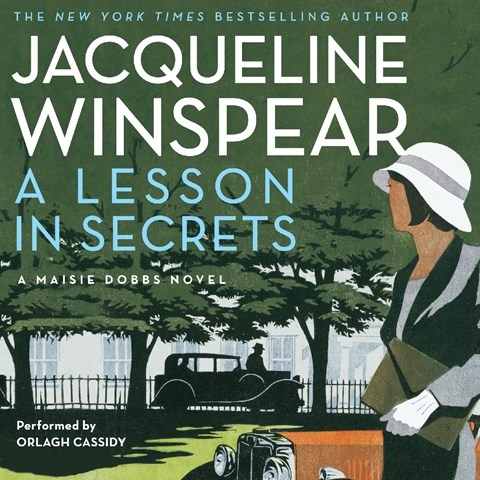 A LESSON IN SECRETS

Winspear's mysteries are audiobook territory in which to lose oneself—irrevocably and delightfully. Maisie Dobbs, an unconventional detective/ psychologist who served as a WWI nurse, responds to an appeal from Scotland Yard to go undercover as a Cambridge professor for the purpose of investigating secret political activities and subterfuge on the eve of WWII. Orlagh Cassidy shines as the intrepid Maisie. Her crystal-clear British accent deftly segues into German, French, American, and Scottish accents when needed. All the story’s pivotal personas and period authenticity are believable and striking. Masterfully juggling several plot threads, including Maisie's clandestine professorial job, a tumultuous romance, and the suspicious death of her secretary's young husband, Cassidy delivers an engaging listen. A.W. © AudioFile 2011, Portland, Maine [Published: MAY 2011]