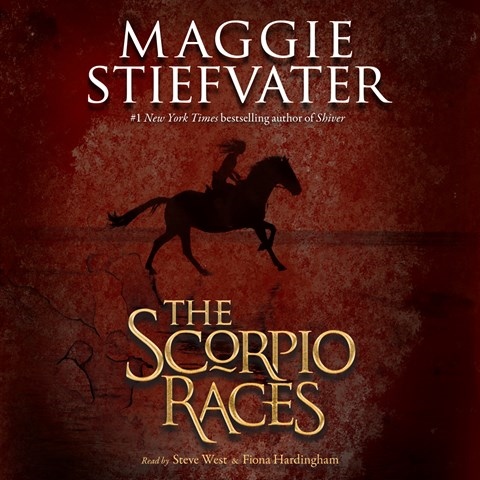 ﻿Steve West and Fiona Hardingham bring Stiefvater’s lyrical prose to life in this fantasy story about the island community of Thisby and its legendary traditions. With charming accents, West and Hardingham recount the island’s feverish devotion to its annual Scorpio Races, featuring unpredictable and dangerous “water horses.” Told from the points of view of 19-year-old Sean and the younger Puck, the narration is a seamless blend of Sean’s rough edge and Puck’s courage. Listeners will find themselves with a deep and lasting sense of the island and of Sean and Puck’s complicated relationship. Both have entered the race with everything on the line, with steeds that are more interested in blood than victory. E.A.B. © AudioFile 2012, Portland, Maine [Published: JANUARY 2012]