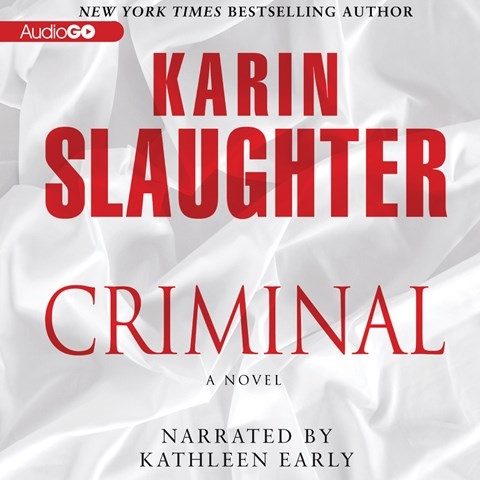 Will Trent’s sordid family history and the birth of the career of Amanda Wagner, Trent’s boss at the Georgia Bureau of Investigation, will engage Slaughter fans in a story that goes back to 1975. The horrific case Wagner cut her teeth on is also part of Trent’s backstory, so narrator Kathleen Early must transition clearly between the earlier police investigation and the present. Early’s composed delivery sets in stark relief the horrors inflicted upon the 1975 victims, who were “pinned down like a specimen in a science project.” The rampant and abusive sexism of the Atlanta Police Department is also graphically depicted. Early’s best performance is her vocal time travel from the youthful, determined Amanda to the gruff GBI agent she becomes, a narrating feat that also applies to her circle of stalwart sisters. Tension is fine-tuned, and characters are subtly shaded in, with Southern accents surprisingly sparse. D.P.D. © AudioFile 2012, Portland, Maine [Published: JULY 2012]