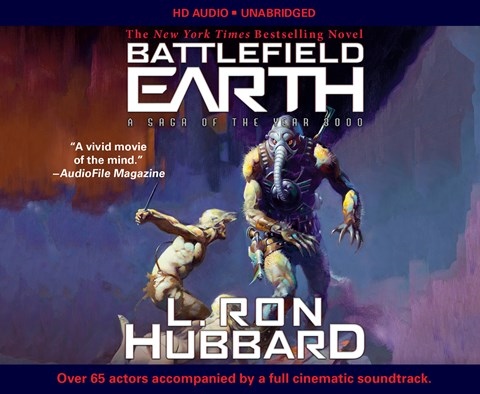 Jonnie Tyler isn’t like the rest of his small, isolated tribe. He wants to know what lies beyond his little valley in what was once called the Rocky Mountains. When he stumbles on a domed mining town run by the alien Psychlos, little does he know he is destined to lead a revolution to free the human race from a thousand years of oppression. Galaxy Press’s adventuresome audiobook employs 67 actors reading 198 parts, sound effects, and original music. This animation-style soundtrack impressively dramatizes Hubbard’s massive and controversial 1982 vision of bringing together Golden Age science-fiction, Western, air-war, and adventure themes in a work of more than 1,000 pages. The result is a vivid movie of the mind. B.P. Winner of AudioFile Earphones Award © AudioFile 2016, Portland, Maine [Published: MARCH 2016]