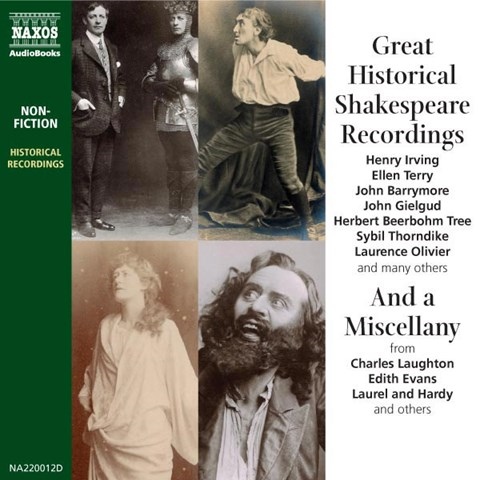 Despite hit-and-miss restoration, this is a delight for the theater buff, cultural historian, and acting professional. The first cassette includes speeches from Shakespeare recorded from 1896 to the 1940s, recited by the most notable actors of the day--Sir Henry Irving, the greatest of the Victorian actor-managers; Ellen Terry, his leading lady; a very young Gielgud; Olivier; Dame Sybil Thorndyke; the American Edwin Booth, John Wilkes's brother; and the Great Profile, John Barrymore; among others. The second cassette presents a miscellaneous collection of theatre and vaudeville--notably Noel Coward and Gertrude Lawrence (the first Anna in THE KING AND I) in the former's musical comedy PRIVATE LIVES; Coquelin, the original stage Cyrano, reading from that play in French; a turn by Laurel and Hardy; and the legendary Sarah Bernhardt. Obviously, some of these performances will seem overblown and dated, but others still possess considerable power. Naxos has spaced its signature classical music bridges to give the ear a rest from the often scratchy recordings, which have been lifted from old discs, wax cylinders, movie sound tracks, and radio broadcasts. Y.R. Winner of AUDIOFILE Earphones Award. © AudioFile 2001, Portland, Maine [Published: APR/MAY 01]