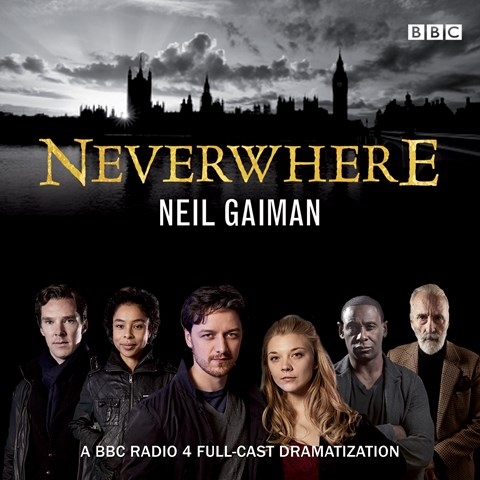 This work morphed from a book to a television miniseries to this full-cast radio adaptation in six episodes plus outtakes. A pantheon of superb British character actors draws listeners into the misadventures of the delightfully obtuse Scotsman Richard Mayhew (James McAvoy) in a magical place called “London Below.” Mayhew’s new companion, the Lady Door (Natalie Dormer), wishes to locate the angel Islington (Benedict Cumberbatch) and avenge her murdered family. Mayhew and Door’s friendship emerges in appealing banter that sounds especially intimate when contrasted with the tones of the frighteningly ethereal Islington. The robust use of sound effects clarifies the story for listeners. City noises, weapons, and many other sounds give reality to Gaiman’s world. While the pacing is disconcertingly rapid, overall, this production exhibits unparalleled direction and casting. C.A. Winner of AudioFile Earphones Award © AudioFile 2013, Portland, Maine [Published: NOVEMBER 2013]