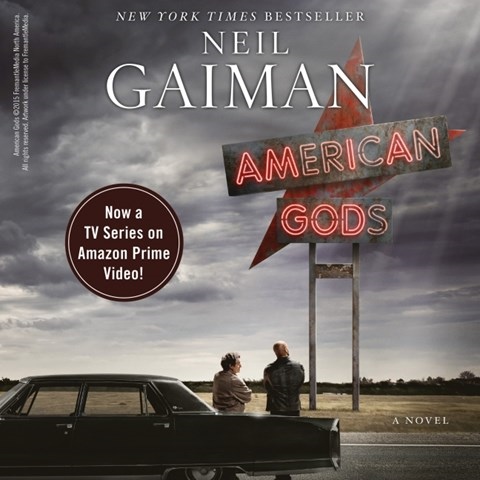 Mere days before he is to be released from prison, a man named Shadow learns that his wife has been killed in a car wreck. On the plane ride home, he meets a gruff old man named Wednesday, who may be an avatar of the Norse god Odin. Read dynamically and emotionally by George Guidall-- who gives more personalities and ethnicities than one would think possible--the story unfolds with Shadow working as Wednesday’s bodyguard in this darkly fantastic travelogue across an American landscape filled with ghosts and ancient gods. The old pantheons seem to be at war with the new gods of technology, media, and fast food. With its roadside vision of American culture and countryside, AMERICAN GODS is right there with TRAVELS WITH CHARLEY and LOLITA. Brilliant dialogue and profound insights into American consciousness show Gaiman to be a visionary and a master wordsmith. Perfect for a long road trip. S.E.S. Winner of AudioFile Earphones Award. 2002 Audie Award Finalist. © AudioFile 2001, Portland, Maine [Published: OCT/ NOV 01]