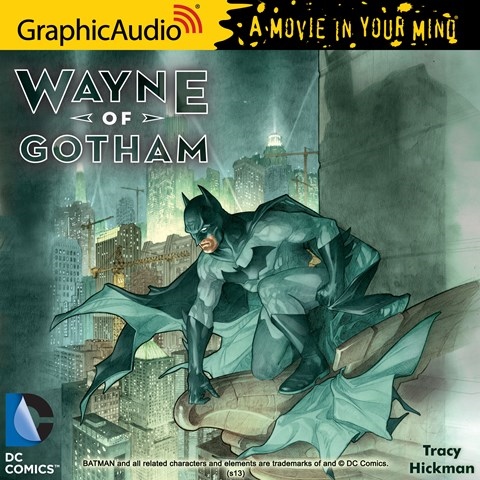 by Tracy Hickman | Read by Richard Rohan and a Full Cast

GraphicAudio delivers another high-octane DC Comics audio adventure with this dramatization of Hickman’s novel. The story switches back and forth between Batman’s present life and the life of Thomas Wayne, Batman’s father. Batman has been sent down a path that reveals clues to his parents’ past, which could destroy Batman’s identity in profound ways. With a full cast, sound effects, and a musical score, the production keeps listeners engaged for its entirety. Richard Rohan delivers the story’s narrative, and, as in many other productions, his deep voice and engaging delivery add to the intensity of the experience. The musical selections capture the scenes well, and the sound effects align perfectly with the action. L.E. © AudioFile 2013, Portland, Maine [Published: DECEMBER 2013]