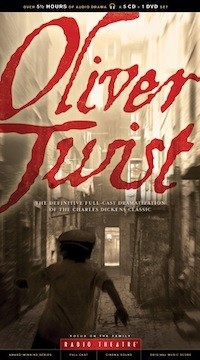 OLIVER TWIST Focus on the Family

Dodging from the orphanage to the workhouse to the back alleys of London, OLIVER TWIST is one of the best known and most beloved stories in English literature. To bring Charles Dickens's fine use of language, satirical eye, and spirited characters to life, producer and director Paul McCusker assembled a wonderful cast of British voice talents, including 11-year-old Joseph Holgate as Oliver, Honeysuckle Weeks ("Foyle's War") as Nancy, and OBE recipient Roy Hudd as Mr. Bumble. With the assured and gentle voice of James Fox ("Downton Abbey") as the "storyteller," the production finds just the right balance between narrative passages and richly dramatized scenes. Mix in BBC-style sound effects, location recording, and an original musical score, and the listener will experience contemporary audio theater at its best. B.P. Winner of AudioFile Earphones Award, 2014 Audies Winner © AudioFile 2014, Portland, Maine [Published: JUNE 2014]