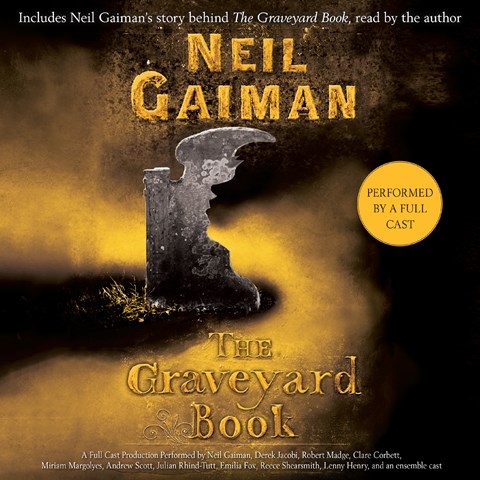 Neil Gaiman fans, rejoice! There are now TWO wonderful versions of THE GRAVEYARD BOOK to listen to. As narrator, Derek Jacobi does the heavy lifting in this full-cast recording, with other cast members voicing characters’ dialogue. It all fits together seamlessly as listeners are swept, entranced and intrigued, into the magical story. Robert Madge sounds perfectly wide-eyed, curious, and boyish voicing Bod, the boy raised in a graveyard by ghosts. Miriam Margolyes’s considerable talents shine as Bod’s nurturing adoptive mother, Mrs. Owens, and as his teacher, Miss Lupescu. And Julian Rhind-Tutt is deliciously grave as Silas, Bod’s mysterious guardian. The cast is uniformly excellent, giving broad or subtle performances as appropriate, and the overall effect is to enhance the sense of the graveyard as a community, and of the dangers lurking outside it. J.M.D. Winner of AudioFile Earphones Award, 2015 Audies Winner © AudioFile 2014, Portland, Maine [Published: OCTOBER 2014]