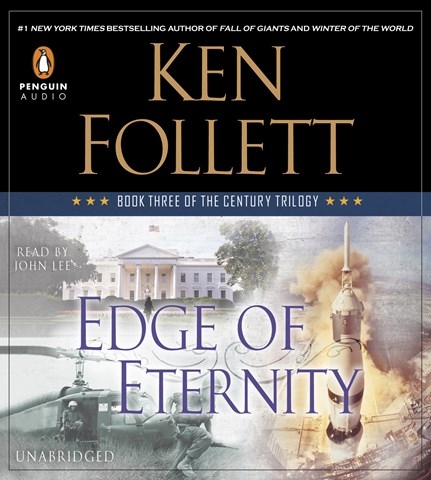 EDGE OF ETERNITY Book Three of the Century Trilogy

By the end of this final audiobook in Follett's engrossing trilogy of the twentieth century, listeners will have just one question: Is there anything narrator John Lee can't do? Lee deftly delivers the array of accents needed for this novel featuring five interconnected families who witness the major political, social, and cultural events of the last 70 years. Not only does Lee create a distinctive voice for each of the many characters, whether German, Russian, British, or American, he also believably renders the speech of historical figures, such as JFK and Martin Luther King, Jr. Lee's exceptional performance is rounded out by a keen sense of pacing and emotion, whether he's delivering a tender love scene or conveying the horrors of a race riot. C.B.L. Winner of AudioFile Earphones Award © AudioFile 2014, Portland, Maine [Published: OCTOBER 2014]