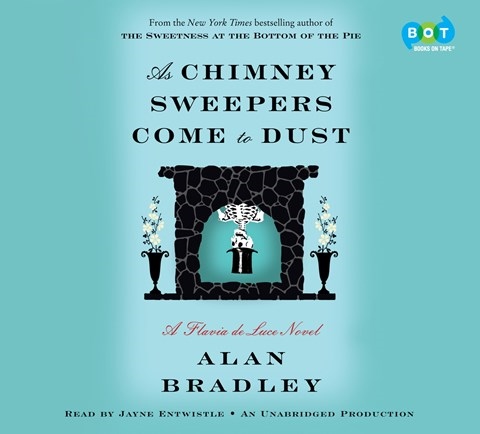 Narrator Jayne Entwistle once again brings to life the beloved British investigative prodigy Flavia de Luce. It is 1951, and 12-year-old Flavia finds herself banished to a girls’ boarding school in Canada, where she’s almost immediately greeted by a blackened dead body falling out of a chimney. Entwistle’s appealing portrayal of Flavia emphasizes the precocious girl’s inquisitive (or perhaps nosy) intellect as she repeatedly breaks school rules to pursue clues about the corpse. Thanks to Entwistle’s refined characterizations, Flavia’s conversations with other characters, including the smooth-talking senior girl and an awe-inspiring chemistry teacher, flow seamlessly. Flavia’s sparkling humor is almost visible in Entwistle’s smiling voice, which switches to occasional melancholy as Flavia reminisces about far-away home. N.M.C. © AudioFile 2015, Portland, Maine [Published: JANUARY 2015]