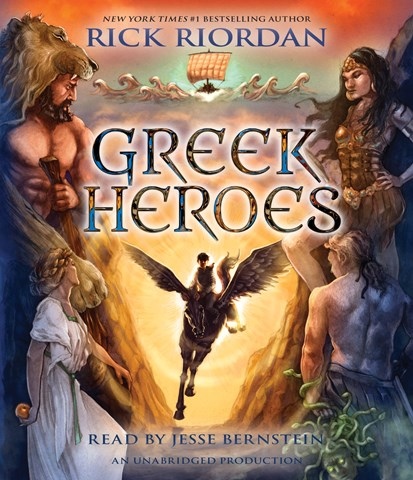 Sixteen-plus hours is a lot of listening time! Yet, taking it in chunks, listeners will delight in this collection, not only appreciating the breadth of the mythology but also the joy that Jesse Bernstein takes in his narration. As Perseus “Percy” Jackson, Bernstein narrates with an insider’s point of view, as he is a son of Poseidon, and the hero and storyteller of Riordan’s Percy Jackson books. Bernstein uses varied pacing, stretched-out words and pauses, and punched-out words and phrases, all in service of portraying the wise, know-it-all teenager that his character is. While the core of the myth is accurate (Atalanta does toss out three apples during her race), its telling is rife with witty comments as well as modern language and phraseology. A.R. Winner of AudioFile Earphones Award © AudioFile 2015, Portland, Maine [Published: OCTOBER 2015]