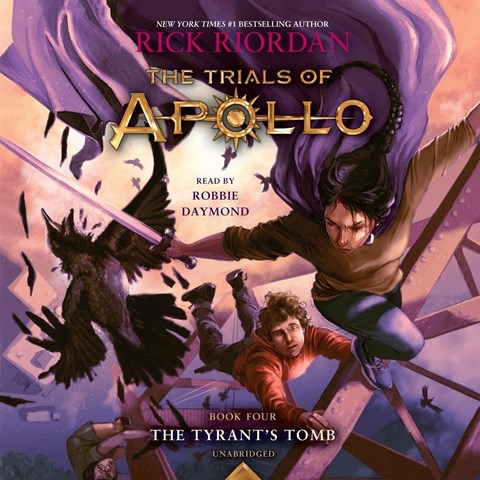 THE TYRANT'S TOMB The Trials of Apollo, Book 4

For four audiobooks now, narrator Robbie Daymond has been lending his voice to the god Apollo, who is temporarily stuck in an all-too-human teenage body. And he has mastered walking the line between communicating the genuine trauma and tragedy of war and conveying Apollo's witty narrative voice--his gallows humor, funny haikus, and sense of godly superiority. As Apollo and his friends from Camp Jupiter try to stop an invasion by Roman emperor baddies, he's dealt lessons about the value of humanity and his own misdeeds as a god. Riordan's canny writing and Daymond's pitch-perfect delivery keep these books about epic battles, sacrifice, friendship, and loss appropriate for 10-year-olds. There's at least one more adventure still to come in this action-packed series--listeners will want to stay tuned. J.M.D. Winner of AudioFile Earphones Award © AudioFile 2019, Portland, Maine [Published: NOVEMBER 2019]