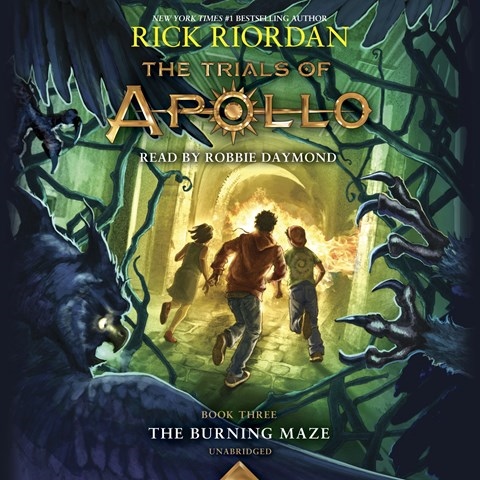 THE BURNING MAZE The Trials of Apollo, Book 3

Just as he has been for the previous two audiobooks in Riordan's Trials of Apollo series, narrator Robbie Daymond is wholly in sync with Apollo's voice. Trapped in the body of a mortal, powerless teenager, the god arrives in California, where drought and wildfires are a result of an underground maze burning with an unearthly flame. While there are flashes of Apollo's old godly vanity, he has also faced great losses during his quest, and thanks to Daymond, Apollo's darker, sadder moments are just as well rendered. Daymond creates individual voices for the large cast of supporting characters, including satyr guide Grover, demigod Meg, and dryad Aloe, and listeners will find it hard to press pause as he delivers every twist and turn in Apollo's continuing adventures. J.M.D. © AudioFile 2018, Portland, Maine [Published: MAY 2018]