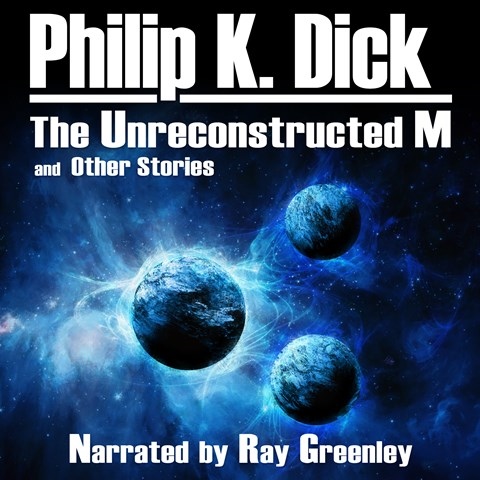 THE UNRECONSTRUCTED M And Other Stories

Ray Greenley deftly narrates these diverse science fiction stories from the 1950s (which often include Dick's views of sociology and politics). Greenley's human voices are dynamic and realistic while his robots sound equally believable, particularly for the '50s. In "The Unreconstructed M," it's unsettling--and fascinating--to learn how a small machine was able to plant evidence at a murder scene. In "Beyond Lies the Wub," listeners will be surprisingly moved when they hear about the killing of a cognitively advanced pig simply for food. Greenley's skillful portrayal of Dick's subtle humor adds a welcome measure of levity. His most amusing rendering is "Beyond the Door," in which a cuckoo clock takes over a household and frees a woman from her nasty husband. S.G.B. © AudioFile 2016, Portland, Maine [Published: MARCH 2016]