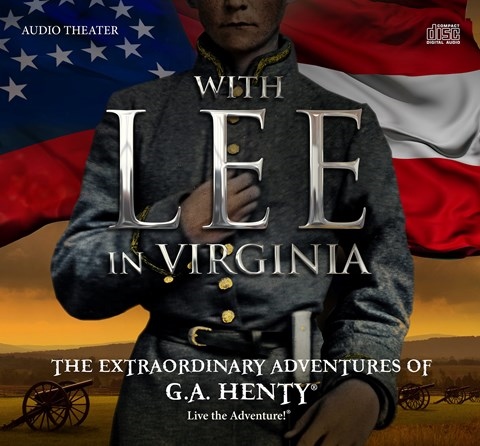 WITH LEE IN VIRGINIA The Extraordinary Adventures of G.A. Henty

This audio drama features a full cast who reenact the Civil War in Virginia. Fifteen-year-old Vincent Wingfield, performed by Justin Shenkarow; his companion and slave, Daniel, performed by Jojo Nwoko; and plucky Lucy Kingston, performed by Kelsey Lansdowne, are filled with the vitality of youth. The narrators’ performances are highly emotional as they describe war, privation, and death. General Robert E. Lee (Andre Sogliuzzo) and Stonewall Jackson (Kirk Cameron) are performed by older voices as is the story's narrator, G.A. Henty (Brian Blessed), who takes listeners to battlefields, a prisoner-of-war camp, and behind enemy lines. A cast of 21 narrators performs over sound effects, including birds, cannons, rifles, and crackling fires. Listeners of all ages will be captivated by this dramatization of the Civil War, the fight for civil rights, and the commitment to duty above all else. M.B.K. 2016 Audies Finalist © AudioFile 2016, Portland, Maine [Published: JANUARY 2016]