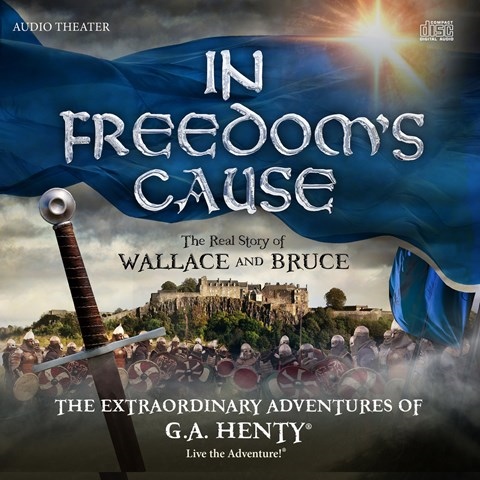 IN FREEDOM'S CAUSE The Real Story of Wallace and Bruce

Step back in time with G.A. Henty to the thrilling and chilling battles of Scots knight William Wallace as he, along with Andrew Moray, defeats an English army at the Battle of Stirling Bridge in September 1297. This extraordinary cast performs the dramatization of the life of Wallace, played by Stuart Pendred, in his long-running skirmishes and battles against King Edward I of England, played by Richard Syms. Sword clashes, horse chases, and the cries of battles add ambiance and excitement to the production. Additional material recounts the leadership role of Robert the Bruce, performed by Andy Harrison, as he unites the Scots nobles under one crown, then hands over rule to the English. The dramatization brings this tumultuous period of Scottish history to life for listeners of all ages. M.B.K. © AudioFile 2016, Portland, Maine [Published: JANUARY 2016]