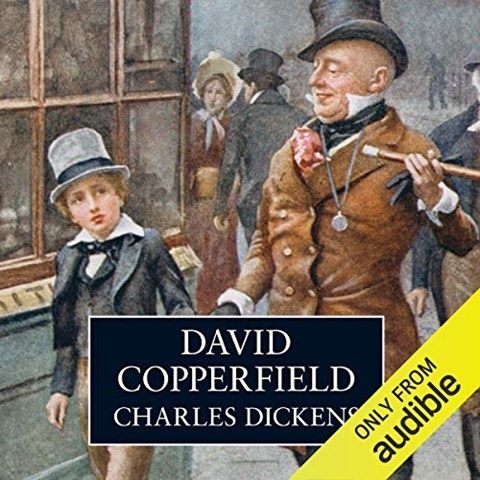 Reading DAVID COPPERFIELD is always a pleasure, but listening to a skilled reader present it is doubly so. As readers, we naturally form our own pictures of Dickens’s characters and give them voices. Listening to Martin Jarvis read, however, adds the pleasure of studying a virtuoso actor re-create each of those characters with masterful acuity and consistency. The icy coldness of the Murdstones, the unctuous villainy of Uriah Heep, the declamatory babble of Micawber, and even the high-pitched assurance of Betsy Trotwood are all given definitive shape by Jarvis’s masterful performance. Behind each of these voices is Jarvis’s intuitive grasp of the character that shapes each. Helen Hayes once said that on stage the most important trait an actor must capture is the walk, but surely in audio literature it is the voice, and Jarvis brings Dickens’s vast circus of voices to breathing life in the novel the author called his “favorite child.” Though recorded originally in the early ‘90s, the quality of this reissued production must impress even by today’s standards, as two masters, Dickens and Jarvis, are clearly here at their best. P.E.F. Winner of AudioFile Earphones Award, 2003 Audie Award Finalist © AudioFile 2002, Portland, Maine [Published: DEC 02/ JAN 03]